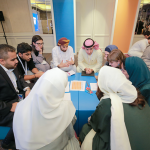 The Misk Global Forum today hosted a breakout session at the Bloomberg Business Forum in New York on the theme of “youth, the driving force of a prosperous economy.”

The panel was composed of established business and thought leaders in Kai-Fu Lee, CEO of Sinovation Ventures, and Pat Gelsinger, CEO of VMWare, alongside young entrepreneurs David Zamarin, Founder & CEO DetraPel, and Hansa Bergwall, Co-founder of WeCroak, who also moderated the discussion. Over the course of a wide-ranging discussion, which included questions from an audience of Bloomberg Global Business Forum attendees, the panel exchanged ideas on how young people can seize and capitalize opportunities in business to ensure prosperity for themselves and society, to ultimately cause real impacts that leave positive legacies.

The panellists agreed on the vital importance of education to ensuring that young people have the skills they need, but also asserted that education systems need to evolve in line with the demands of the world. Pat Gelsinger noted that, “we used to say education was reading, writing, and arithmetic. In the future we might say it’s read, write code, and arithmetic,” while asserting that solving access to education through basic connectivity was achievable within the next ten or twenty years.

Expanding on the theme of education, the speakers further emphasized the importance of personal mentors to young people’s success. Entrepreneur David Zamarin, himself only 21 years old, spoke from his personal experience, saying, “I learnt a lot from social media and online… But I wouldn’t have been able to get started without the personalized mentorship I got that took me to the next step.” Agreeing with Zamarin, Kai-Fu Lee suggested three things for young people to look for in a mentor: “One, someone you respect… Two, you’re looking for life experiences in them that you can bring to your own life. Third, you’re looking for time. I want some of their time invested into my life.”

The panel went on to discuss some of the changes sweeping the world of work, including both the pitfalls and opportunities posed by these rapid changes. On the “gig economy,” Kai- Fu Lee noted that, “in the future we should imagine that people aren’t stuck with one job, 2 they’re doing two or three things… I don’t think humans are meant to be on earth to do routine jobs.”

David Zamarin agreed, urging young people looking to succeed to “find what your value is for people who want to consume your creativity,” while offering reassurance that, “if you fail, that’s ok! In reality failure is just learning from mistakes. A gig economy provides that [opportunity to learn].”

Pat Gelsinger linked this to their discussion of education, emphasising that to succeed in this environment constant skill development was vital and that, “training is no longer a statement of completion, it’s an ongoing life event… All of us have to be comfortable with the uncomfortable.”

Discussions turned to the ways in which young people and companies can cause wider positive impacts. David Zamarin offered that, “a lot of time people are afraid of risk, but I think as entrepreneurs and business leaders we like taking on risk. It’s a great way of stimulating the economy.” Zamarin also noted that a big motivator for a lot of young entrepreneurs is “to make such a dent into their world that it changes fundamental rules.”

Pat Gelsinger, referencing the threat posed by climate change, argued that while no one business could make enough of a difference, “collectively we can un-bankrupt the planet for the next generation,” while also emphasising that, “the role of the business is not just about shareholder returns.”

Kai-Fu Lee, speaking from his experience as a mentor, stated that, “people really have to do what they love to be the best they can be…. So in our company we want to hire the best people and put them in the right seats… Help people find the true voice in their heart, and be who they want to be.”

While Hansa Bergwall noted in his opening and closing remarks that, “the youth of today want to hold on to those things that matter the most and let go of everything else,” and called on people to recognize that, “life is short and previous and to make the most of it while you can.”

The session was organized by the Misk Global Forum (MGF). Opening the session and welcoming the panellists to the stage, Shaima Hamidaddin, Executive Manager of the Misk Global Forum, noted that, “We take the Misk Foundation’s mission around the world, to over 185 countries. We empower young people, over 900,000 so far, to thrive in the future economy and become active global citizens. And attending events such as the Bloomberg Business Forum is part of that mission.

Earlier in the week, the Misk Global Forum hosted the inaugural Misk Youth Forum as another element of its international mission. At the forum, young people from over 70 countries came together in the heart of global business to discuss how to change business for good by balancing profit with purpose and place a new emphasis on the fulfilling the Sustainable Development Goals (SDGs)

New York City, 23 September 2019 – The inaugural Misk Youth Forum closed today with young people from over 70 countries coming together in the heart of global business to discuss how to change business for good by balancing profit with purpose and putting a new emphasis on the fulfilling the Sustainable Development Goals (SDGs).

Across the day’s events, young people engaged with established leaders, emerging changemakers, and their peers on challenging themselves and their leaders to bring real change. The topics discussed ranged from the importance of entrepreneurship to sustainable development to the role of sports in driving wider changes; from taking personal responsibility for change to how new regulatory approaches can incentivise socially- responsible businesses, all with the goal of creating real impact on the ground.

The forum also saw the launch of one new way to drive impact: the #OneWord challenge of #ItStartsWithUs. This is a new initiative to drive young people’s engagement with the Sustainable Development Goals by writing one word they believe can inspire action and impact on their finger, tweeting a photo, and challenging their friends to do the same.

Opening the wider forum, Shaima Hamidaddin, Executive Manager of Misk Global Forum, emphasised that the event was an opportunity for the young people in attendance “to bring your voices, ideas, energy and creativity to policy-makers, NGO leaders and business leaders. Together you can work to redefine the purpose of business for good, achieve social and environmental goals, and sustain those impacts for the long-term.”

With the forum’s mission laid out, a full house heard from three young social entrepreneurs from across the world had begun to do just that. Victoria Alonsoperez, Founder & CEO of Chipsafer in Uruguay, spoke of how an outbreak of disease that threatened her country’s vital agricultural sector had inspired her to combine social concerns with a passion for new technology to create Chipsafer. She called on young people to be given greater access to new technologies, “because what they can achieve is unbelievable – they can solve the problems in their communities.”

Razan Farhan Alaqil, Saudi Arabia’s National Focal Point of the Arab Youth Platform for Sustainable Development, called on young people to take action themselves, saying, “each individual in this room, each individual all around the world has to be responsible to say ‘I am responsible for my lifestyle.’ We can’t expect to see change if we’re not a part of it.”

Meanwhile, Ezequiel Vedana da Rosa from Brazil, founder of sanitation solution Piipee, emphasised the need for entrepreneurs and changemakers to focus on simple solutions and offered a simple mantra for success to guide others: “I think our challenge is life is to find a purpose… because i really believe we are not just here to be here. We have to have a mission to do good.”

As the day progressed, more young entrepreneurs offered their experiences and inspiration to the audience, earning praise from established leaders who expressed their admiration and hopes for the new generation to “change the world if we give them the chance.” Indeed, sustainability expert Paul Polman, Co-Founder & Chair of Imagine, stated that, “it’s young people’s future. So we need to be sure we not only give them a seat at the table, we give them the table.”

Alongside the vital role played by business and the private sector, the Saudi women’s football team – founded for and competing in the SDG World Cup – offered a unique insight into how sports can have a wider impact. Taking to the stage, the team described how their sports clubs were bringing together the teams, families, and Saudi authorities to improve health, recycle, and completely engage their community with the SDGs. Their session ended with footballing legend Thierry Henry taking to the stage, ahead of his own session on how to expand access to education, to offer his own coaching expertise.

Alongside these plenary sessions, the World Bank, Acumen, Bridge for Billions, and Global Pulse conducted workshops on how to achieve entrepreneurship success and drive change through social enterprises.

The Misk Youth Forum was held as part of the Misk Global Forum’s commitment to taking its mission to empower young people with the skills they need for the future economy and to become global citizens. The forum concluded with Shaima Hamidaddin thanking all those who had taken part and expressing the hope that participants would join MGF at its annual gathering in Riyadh in November.

We use cookies to ensure that we give you the best experience on our website. If you continue to use this site we will assume that you are happy with it.Ok