More than half (57%) of young people around the world are unfamiliar with the concept of the future economy, new research has revealed. The Global Youth Survey, undertaken by Populus on behalf of the Misk Foundation, shows that young people around the world are not fully aware of the economic changes and challenges of the new economy that are already shaping how people will live, learn and work.

The survey also found that more than half fear they are not sufficiently tech-savvy to access opportunities that will come from technological progress in areas such as data mining, machine learning and blockchain.

Interviews were conducted with 21,000 young people between the ages of 16 and 35 in 21 countries around the world – the 19 nation-state members of the G20, and Nigeria and Pakistan due to their large and growing young populations.

The research, unveiled at Misk Global Forum, showed that 59% of young people are positive about the impact on technology on work, with only 4% believing that technological change is a challenge to their generation. The study also revealed that young people are increasingly ready to embrace change, with 65% describing themselves as open-minded and three in five regarding themselves as adaptable.

Shaima Hamidaddin, Executive Manager at the Misk Foundation, said: “This research serves to underline the importance of developing and empowering young people all over the world – not just in Saudi Arabia. Meeting the challenge of change brought about by the fourth industrial revolution will not be easy, but young people the world over have the potential and the attitude to meet it.

“The Misk Global Forum is providing a platform for young people from around the world to draw on this open-mindedness and eagerness to learn to connect with established leaders and innovators so they can experiment, explore, and map what their futures can look like.” 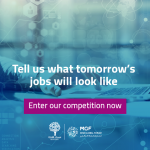 We were delighted to be part of this year’s World Economic Forum in Davos, Switzerland, the world’s biggest gathering of leaders and thinkers.

During the debate, music star and entrepreneur will.i.am gave his ideas from the audience of how to inspire young people, saying, “it’s not just teaching – you have to give young people a cause, encourage them and make them believe they can solve their own problems with these skillsets.”

On the final day of the forum, the Misk Foundation hosted the Misk Saudi Voyage that allowed participants to experience and enjoy the very best in Saudi Arabian art, food and music.

Following the debate at Davos, we launched our Misk Tomorrow’s Jobs competition, posing the question: what do you think tomorrow’s jobs will be like?

It’s a global issue and we’re looking for your best ideas on the future of jobs – find out more about how to enter here. 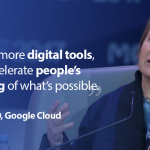 During her first visit to the Kingdom, Greene expressed how impressed she was by young people and their enthusiasm for change. She also spoke of how the country already had female experts and leaders in the field of technology, who would find no difficulty in becoming part of the future of Saudi Arabia.

The Misk Global Forum was first held in 2016 and is the flagship platform of the Misk Foundation, a non-profit philanthropic foundation established by HRH Crown Prince Mohammad bin Salman to discover, develop and empower Saudi youth to become active participants in the knowledge economy.

Last year’s event was attended by more than 5,000 participants and comprised of two days of interactive, collaborative, and innovative discussions and workshops on ‘meeting the challenge of change’. Greene was joined by other speakers including HM Queen Rania of Jordan and Bill Gates, the co-founder of the Bill & Melinda Gates Foundation.

We use cookies to ensure that we give you the best experience on our website. If you continue to use this site we will assume that you are happy with it.Ok